A look back: We were exploring EVs 50 years ago

This story is evidence that, even though we may not have called it that in 1969, we were already actively interested in Powering What’s Next.

This photo shows the 1968 Mars II silent electric automobile, the first production unit off the line at Electric Fuel Propulsion, Inc, a company then located in Ferndale, Michigan.

Wisconsin Power and Light was the first utility to purchase this advanced-design electric car. In February 1969, we displayed the EV in front of our Monroe, Wisconsin, office, then located on Monroe’s central Downtown Historic Courthouse Square.

This interesting historical nugget came to our attention via a recent “Celebrating Our Past” feature published by the Monroe Times.

As we announced last fall, ConnectYourCare (CYC) was chosen to replace Your Spending Account (YSA). Several factors went into the selection process. Items at the top of our list included customer service, ease of use and portfolio of services offered..

What to expect next

Visit the Under 65 Medical Plan page in the Benefits and Pension Info section for more information. We’ll post additional instructions for registering for your new account before cards arrive in the mail.

A look back: Kitchen appliances you’d have wanted if you lived in 1929

Just 90 years ago, modern electric kitchen appliances were rare in American homes and demonstrating their advantages was part of the job description for retail workers at the local utility company.

This photograph depicts the interior of our retail office in Dodgeville, Wis., in 1929.

New electric appliances were displayed prominently on the office floor to prompt customers to inquire about the snazzy new technology.

This photo and accompanying article appeared in the November 1929 edition of Power and Light News, a publication for employees of Wisconsin Power & Light Company, soon after the day designated as the official start of the Great Depression, October 24, 1929.

Choice, convenience and control in action

My Account upgrade delivers many benefits for Alliant Energy customers

We are updating My Account for our customers use to manage their accounts online. Their expectations of us are shifting and we’re working to meet them where they are, providing online convenience similar to other aspects of their day-to-day work and shopping experiences.

The new My Account is expected to “Go Live” for customers in January 2020.

A look back: Kind of like playing with an erector set

Because new highway construction near Portage, Wisconsin, required a longer span across the roadway, the 12-person team had to transfer two high-voltage transmission lines from poles to 115-foot towers. According to the crew doing the work, this was a first.

These five images show the day’s progress. From the left, they started by putting up the base and securing it. Then, with the help of a crane, they eased the top portion into place, almost as if it were an oversized Erector Set. By 2 p.m., everything was in place and securely bolted down. Job well done!

The photos and accompanying article first appeared in the September 1963 issue of Employees’ News, the monthly internal news magazine of Wisconsin Power and Light Company.

A look back: ...and other duties as assigned

Virtually every job description includes the open-ended statement “and other duties as assigned.” However, as broad as the phrase is, it’s safe to say almost none of us would consider the task pictured here as legitimately falling within the scope of the term.

But in 1970 for two Wisconsin Power & Light employees, it was all in a normal day’s work. It’s because the two men had the job of inspecting – via truck and on foot – 3,000 miles of high-voltage transmission lines in 34 Wisconsin counties.

They did no repairs and climbed no poles. Using binoculars and their feet (always in sturdy boots), they checked transmission lines for broken insulators, encroaching trees, loose hardware or bad crossarms.

The reports of what they’d seen enabled the company to address small problems before they had time to morph into big ones.

The work presented them with several inherent challenges, one of them being forced to cross the Fox River in the manner shown. They also routinely had to contend with barbed wire fences, thistles, poison ivy, hornets, bulls, snakes and more. At one time, they even carried tear-gas guns in case they had to ward off an imminent threat. But they stopped carrying the guns; they never used them.

This photo and accompanying article appeared in the November 1970 issue of Employees’ News, an employee publication of the Wisconsin Power & Light Company.

After reviewing multiple vendors, ConnectYourCare (CYC) has been chosen to replace Your Spending Account (YSA). Several factors went into the selection process. Items at the top of our list included customer service, ease of use and portfolio of services offered.

Making things better
We’re excited about the improvements and expect they will make things better for you. For instance, the verification process will be easier. CYC's system tracks medical and dental claims, so, in some cases, it will verify card swipes automatically if you're on our medical and dental plans (Anthem and Delta Dental). We expect you will spend less time scanning and uploading documents.

What else is new?

We’ll provide resources for navigating the new system and keep you up-to-date on the transition process.

Annual enrollment in benefits is Oct. 14-28

Mark your calendar. Annual Enrollment, when you select and enroll in your benefits, is October 14–28. You’ll receive a letter at your home address outlining the process and what you can expect. Your Annual Enrollment packet will arrive shortly afterward.

A former Alliant Energy-WPL employee, Edith Hillard, was the subject of a recent madison.com article. After retiring from WPL at age 50, Edith was an active member of the Madison community. Read all about her life and the impact she has made in the article.

Alliant Energy's 2019 Sustainability Report is now available online. The report includes many quick-read stories on numerous topics that tell our sustainability story and how we are Living our Values. We highlight how our actions are serving the needs of our customers, being mindful of the world around us.

Some highlights of the report:

The report can be accessed at alliantenergy.com/sustainability.

On Thursday, explosive charges brought down the remaining structures at Sutherland Generating Station. The demolition was carried out by Bierlesutherland last sunsetin Companies from Midland, Mich., and Dykon Blasting Corporation of Tulsa, Okla.

Crews have been busy for several months removing parts of the facility. The final section of the boiler house was imploded. This approach is safer because workers using excavating equipment don’t have to worry about falling debris. It is also a less expensive option that is more beneficial for our customers.

At its peak, Sutherland’s three turbines could generate a total of 165 megawatts of electricity and employed more than 60 people. Decommissioning work began in August 2018. More than 99% of the materials from SGS will either be reused on the site or recycled.

Here is a video from the implosion that is being featured on our social media channels. (The photo of Sutherland at right was taken on the morning of demolition by Delania Halter, Office Administrator, Marshalltown Generating Station.)

A look back: Getting paid to work out?

Bob Lukoski, a Truck Driver and Ground Man at our Ripon, Wis., office in the 1970s, used to run two to three times per week. The best part, though, is he got paid $20, plus reasonable expenses, every time he worked out.

That’s because, in his off hours, he was a basketball referee for the Wisconsin Intercollegiate Athletic Association.

It’s a novel way to get exercise.

Bob had been doing this for 19 years when the original article was written, and he probably logged quite a few years after that.

Regarding his refereeing experience, Bob said, “Sure, I’ve made bad calls. Any guy who says he hasn’t is a liar. The thing to do is forget it and concentrate on the rest of the game. You can’t second guess yourself. Once you’ve blown the whistle, that’s it. You’ve called it.”

It sounds like good advice that would apply to just about everyone.

This photo and accompanying article appeared in the Spring 1975 issue edition of Concepts, an employee publication of the Wisconsin Power & Light Company.

We are replacing Your Spending Account (YSA) with a new vendor in 2020. We’ve listened to your concerns about YSA and made it a priority to find and choose a new administrator. Our new vendor also offers more services and administrative support that align with our strategy – which allows us to think beyond and be bold.

The name of the new vendor and timing, along with the list of what’s changing (and what isn’t), will be communicated in the coming weeks.

To provide a smooth transition to the new vendor, we’re already engaged with experts in project and change management. We created a focus group in support of this project, and they will provide input as we go through the transition.

Please continue to use your YSA as usual to pay for, or be reimbursed for, health, dependent care and parking charges. Continue to submit claims and documents to support claims when requested.

The chant of an experienced auctioneer is unmistakable. The gentleman on the left, Iver Leatherberry, had a day job with Wisconsin Power & Light as a Consumer Services Representative II in Ripon. The photo, from 1979, shows him doing his after-hours and weekend job of being a successful auctioneer.

He learned the skill in 1952 at a two-week course at an auctioneering school in Iowa. Iver described it as “the best $125 I’ve ever spent.”

Iver described what he learned like this: “At the school, I learned the language of auctioneering. Auctioneers ‘cry’ – not conduct – auctions. And every auctioneer has a unique lingo, which is called a ‘roll.’ ” He went on to say, “We learned the fill words that are part of every auctioneer’s roll. Although the instructor suggested different rolls to us, we each had to develop our own. I try to make mine pleasing to the ear, and I throw in a little humor so people don’t get bored.”

This photo and an accompanying article appeared in the fall 1979 edition of Concepts, the employee magazine of the Wisconsin Power & Light Company.

What if electricity really did take a day off?

This undated “Fort Madison Electric Company” sign still hangs in a place of honor at the Green Bay Bar and Grill in Wever, Iowa, a small town not far from Fort Madison.

It frames the question hypothetically. Without electricity, there’d be no breakfast, no street cars, no telephones, no lights in stores or offices and no power in factories. Good point.

But, the good news is, as the sign states, “electric service takes no vacations!”

We’d love to tell you how old the sign is, but we don’t have the information. Let’s just say it was so long ago phone numbers only had three digits.

Lunar stroll half a century ago


Fifty years ago, on July 16, 1969, the Apollo 11 mission launched, transporting the first two humans destined to walk on the moon. Four days later, when Neil Armstrong and Buzz Aldrin landed the Eagle on the moon’s surface, their accomplishment captured the imaginations of people around the world!

Six hours after they’d landed, in a televised segment beamed back to Earth, Armstrong and Aldrin became the first humans to step onto the surface of the moon.

Congratulatory messages immediately streamed in from all over the world, including this example from the employees of one of our predecessor companies, Iowa Southern Utilities Company.

The overtly masculine framing of the language in this ad was common for the time, but the actual composition of the technical team who made this mission possible was much more diverse.

Plugged In has company updates and information you need to know. Published twice per year. 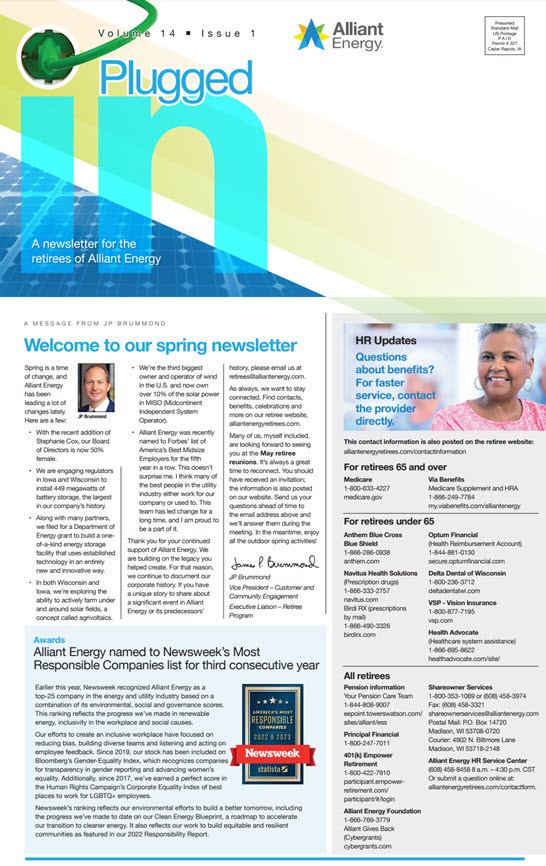